The Slovenian company Hermi, which manufactures, sells and develops lightning and surge protection, cable trays and ladders and mounting systems support structures for solar power plants, is celebrating its 20th anniversary of establishing a subsidiary in Croatia. The Slovenian owner founded Hermi Hrvatska as the first foreign subsidiary on June 17, 2002. At first, the company employed one person, today it employs seven people. The average growth of revenues in the last decade is 20% per year.

In the first years, the business model of the company Hermi Hrvatska consisted of selling lightning components, executing lightning installations, and educating customers and the public regarding adequate lightning protection. A professional and personal approach towards customers, exhibiting at Zagreb Fairs, international construction fairs SASO Split, renewable resources fairs Cro Eco-Energy Expo in Varaždin and other smaller local fairs were prominent business activities of the company in Croatia at the beginning. In the first five-year period the entire turnover was generated by the sale of lightning rod components. 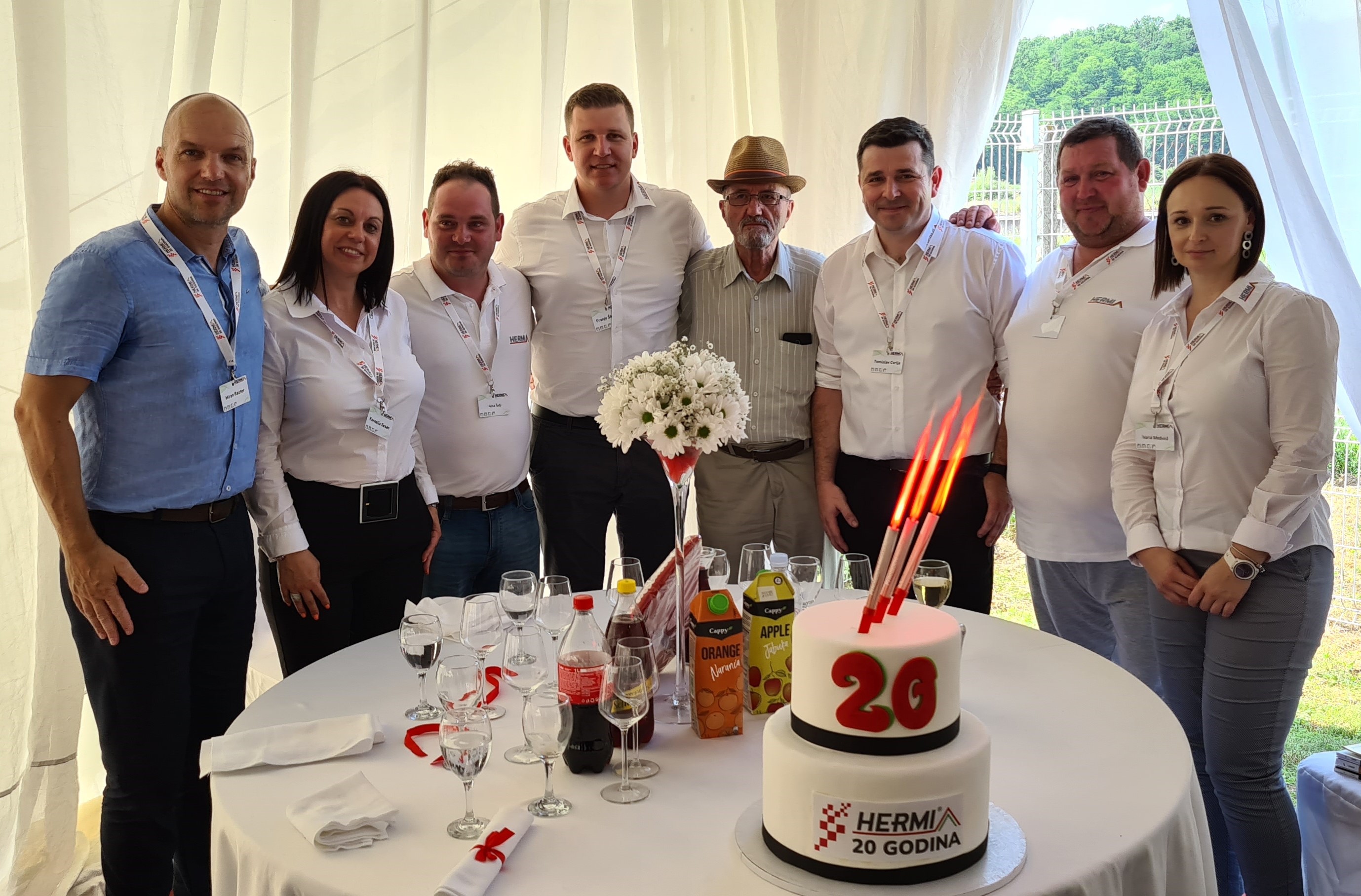 With the development of the company and its products, surge protection segment was added to the sales program in 2007, mounting systems for solar power plants in 2010, and finally, in 2013, cable trays and ladders for the distribution of electrical and other installations. Increased demand, sales and expansion of the team also led to the purchase of land and the construction of our own business and warehouse premises in the town of Sveti Ivan Zelina, where we moved in 2012.

The past three years have been quite volatile for Hermi Hrvatska, as after a decade of moderate growth, sales declined in 2020 due to the coronavirus. Through consolidation, digitization and reorganization, we increased sales again in 2021 and at the end of last year recorded an almost 50% higher turnover than in the first corona year. If the growth and the positive economic climate continue, we are hoping for increased sales both in terms of value and volume this year as well. Otherwise, we estimate that the 10-year average sales growth in Croatia is 20 per cent year-on-year.

Due to increased demand and sales to other export markets, the parent company built a new production facility in Slovenia last year and tripled production capacity. To ensure adequate stock and deliverability in Croatia, we plan to expand the central warehouse in Zelina and hire additional people soon.

Hermi Hrvatska has proven to be a competent and reliable partner for twenty years. Hermi lightning conductor components are installed at the main railway stations of the Croatian Railways in Zagreb, Zadar, Karlovac, and Vinkovci, at the border crossings between Slovenia and Croatia, and the airports in Split and Dubrovnik. Many commercial and business buildings in various parts of Croatia, restaurants and inns, apartment complexes and hotels, churches, monasteries and other historical buildings, public buildings and production halls are equipped with Hermi lightning and surge protection. Hermi cable trays systems are installed in many buildings, such as the West Gate Split skyscraper, the tobacco company Tvornica Duhana Zagreb, and the company, Cromaris among others. Among the references with mounting systems, we highlight the MFE Farma Sol Petrovija solar plant in the town of Buja and a large number of smaller PV plants.

We asked the project manager in Croatia, Tomislav Cvrlja, about the most prominent projects in history: “Of the references throughout Croatia, I would not like to highlight any in particular to miss something. I would emphasize that we are present in the most important sacral buildings, such as the cathedral in Zagreb, Đakovo, and Bjelovar. Shopping centres include Ikea Zagreb, Portanova Osijek, City Centar ONE, shopping centre Špansko, retail chains Lidl, etc. Our solutions are installed in various hotels, such as Hotel Park Poreč, Lone Rovinj, Hotel Amarin Rovinj, and Hotel Albona Rabac, in business and production facilities OMCO Croatia, Vetropack Straža, FAAC Zaprešić, TE-TO Zagreb, data centre A1 in Zagreb. With Hermi products, we are also present at infrastructure facilities and thus protect bridges such as the Pelješac Bridge and the Drava Bridge.”

In the end, Cvrlja explains: “From these data, it is clear that we are present on and in all large and important projects in the territory of the Republic of Croatia. I also consider it a great success that we managed to sell cable racks from Croatia for the distribution of installations at one from Chinese shipping ports and that we carried out the protection of data centres for the international corporation Shell.”

The company Hermi Hrvatska has been active for twenty years in raising awareness and education about the importance and necessity of installing adequate and high-quality lightning protection. Hermi experts are often invited to numerous lectures and round tables; the company is also a member of the Zagreb Electrotechnical Society (Elektrotehničko društvo Zagreb - EDZ) and the Croatian Standards Institute (Hrvatski zavod za norme - HZN). In addition to recruitment, the company in Croatia provides scholarships to promising young people and provides professional practice and summer work.